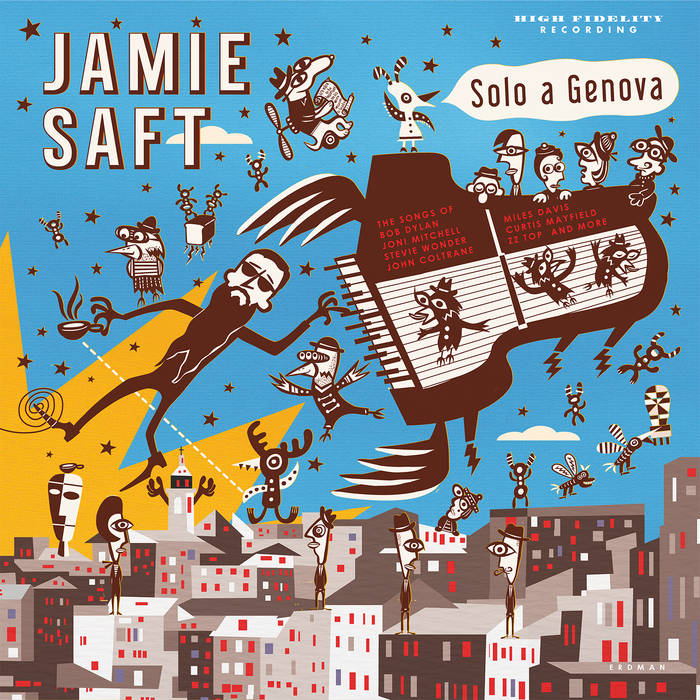 One of the most prolific artists in the RareNoise roster, Jamie Saft has appeared on recordings by such groups as Metallic Taste of Blood, Slobber Pup, Plymouth, Red Hill, The Spanish Donkey and Berserk! as well as on collaborations with Steve Swallow and Bobby Previte (New Standard / Loneliness Road, which also featured Iggy Pop, Bill Brovold (Serenity Knolls), Roswell Rudd (Strength & Power) and his own New Zion album (Sunshine Seas). His sprawling discography, which includes prodigious sideman work with John Zorn, numbers over 160 albums. And yet, over all those sessions he has never recorded a solo piano album. “I've incorporated some solo piano pieces into other records of mine before, but this is something unique for me,” says the ubiquitous keyboardist. “This is my first proper full length solo piano album in 25 years of making records.” The album will be released on February 2nd and will be available on CD, vinyl and download.

Solo A Genova is Saft’s highly emotive take on jazz standards and other uniquely American compositions. “I first conceived of this recital of music back in 2007,” he explains. “I was asked by my good friend Giuseppe Vigna to give a solo piano recital in Florence, Italy. At that moment in time, the United States was in a rough patch politically, so I wanted to present American music as an example of positive, forward thinking art — art that made a difference in the world, art that resisted hatred and negativity, art that promoted a positive path forward for mankind. I chose songs from artists that were dear to me: Bob Dylan, Stevie Wonder, Miles Davis, John Coltrane, Joni Mitchell, Curtis Mayfield, Charles Ives. Who better to represent the transformative powers of music than these brilliant writers?

Recorded at the beautiful Teatro Carlo Felice in Genova, Italy in an acoustically marvellous space, Solo A Genova showcases Saft on a 9-foot Steinway Model D piano in the service of these beguiling tunes. “My primary influences for solo piano are actually the very same influences for playing the piano in any situation: Bill Evans, Thelonious Monk and Garth Hudson of The Band. Each has a uniquely personal approach to solo piano stylings. Each of these masters incorporates the entire history of modern music within their piano worlds. Their music IS American classical music.”

The album opens with a pure expression of happiness on Curtis Mayfield's "The Makings Of You” and is followed by an interpretation of Jimmy Jam-Terry Lewis' "Human" which melds beautifully to Saft’s own “Gates.” Says Saft, “Those are both brilliant examples of the complexities of human beings. Each of these tunes is trance-like and transformative and swiftly transports the listener. The harmonic approaches of each of these songs is deeply fundamental and helps propel the message of the song perfectly.
Saft takes Coltrane’s meditative ballad “Naima” to some new places in an expressive solo interpretation. As he explains, “‘Naima’ is of primary importance in my musical development. I've been working on that tune for more than 30 years. There's an entire universe of harmonic possibilities proposed within this piece. Coltrane spent years pushing the boundaries of modern music within this one piece of music, so certainly my interpretation is deeply personal. His highly impressionistic take on ZZ Top’s "Sharp Dressed Man” is imbued with daring improvisations and dramatic twists. “That was improvised entirely in the moment,” he explains. “I always try to take a radically different approach to covering something like a piece by ZZ Top each time I perform it. Some pieces of music require a simple, straight-forward rendering. This piece begged for something deeper. ZZ Top's music for me has always been about resonances. Power chords on the guitar sustain in truly unique ways. I've tried to look for these same resonances inside this giant concert Steinway Model D piano: literally inside the piano! This arrangement just happened this way. This was the beginning of the second half of the concert portion of the evening, so I really tried to transform this piece into something with a more classical approach. He next turns in a faithful rendition of Stevie Wonder’s “Overjoyed.” Says Saft, “With this Stevie Wonder's song there is such a strong and deep architecture already in place, so I felt no need to transform this piece at all. I wanted to retain all the positivity and hopefulness of the original so there was really nothing to change. It’s just a respectful and humble performance of a great masterpiece of modern popular music.”

"Po' Boy,” a later period Bob Dylan tune, speaks of another time and place both lyrically and musically. “This is a perfect vehicle for me to try and relax into some nice stride styles with a big nod to Thelonious Monk in my approach. A simple song can often have complex structures hidden within it. ‘Po' Boy’ is a great example of this. Little twists and odd numbers of beats can be found within this piece. It creates a sonic world that is both relaxed, familiar, and yet not really at rest at all. It's also the rare piece of music written in C Major that resonates with me.”

Two Saft originals, "The New Standard" and "Pinkus," are both very soulful expressions that were previously recorded by the keyboardist — "The New Standard" is the title track from a recent RareNoise album he made with Steve Swallow and Bobby Private while "Pinkus" appears on his New Zion Trio album Chaliwa as well as on Loneliness Road. Saft’s rendition of Joni Mitchell’s "Blue Room Motel" is even more melancholy than the original. “That tune, for me, has always been the essential expression of the traveling musician's path,” he says. “It’s the ultimate elucidation of the melancholic path. In fact, the word ‘Hejira,’ the album from which it originates, is said by Joni to mean ‘leaving the dream no blame.’

Shifting gears, Saft next tackles Charles Ives’ “The Housatonic at Stockbridge.” Says the pianist, “I've worked on that piece for decades and still have barely scratched the surface. As a student of the great composer and clarinetist Joe Maneri in the late 1980's in Boston, I was tasked with learning to sing and accompany myself on classical ‘lieder’ — things like Schumann and Schubert. I attempted to learn to sing and accompany myself on these composers but their music didn't really speak to me in the same way as Ives’ did. So I began trying to accomplish this play and sing idea with Ives' music instead. Ives' harmonic explorations were revolutionary. He incorporated 12-tone serialist concepts in his music years before Schoenberg. Ives explored microtones, harmonic dissonances, rhythmic confusion and multiple musical threads coexisting together on the same plane. Ives' nod towards aleatory music pre-dated John Cage by decades. He stands as one of the greatest composers of all time, in my opinion. His music is steeped in European classical forms but with a deep understanding of a uniquely American perspective on sound manipulation. Presented here in my solo piano version, I tried to draw out the essential harmonic and melodic paths of this piece while improvising within Ives' harmonic world”.

Saft delivers a precious version of "Blue In Green,” the gentle Bill Evans composition which appeared on the 1959 Miles Davis classic, Kind of Blue. “'Blue In Green’, like ‘Naima,’ was one of the first pieces of music I learned from the jazz universe,” The final piece on Solo a Genova is an interpretation of an early Bob Dylan tune, “Restless Farewell.” Says Saft, a noted Dylanphile, “This tune absolutely looks to higher states of consciousness. It speaks of a man looking back and taking stock of his life. Bob Dylan lovingly sang this song to Frank Sinatra on Sinatra's 80th birthday.

The rare, emotional outpouring and transformative power of Saft’s piano is in evidence throughout Solo a Genova, his brilliant solo piano debut.