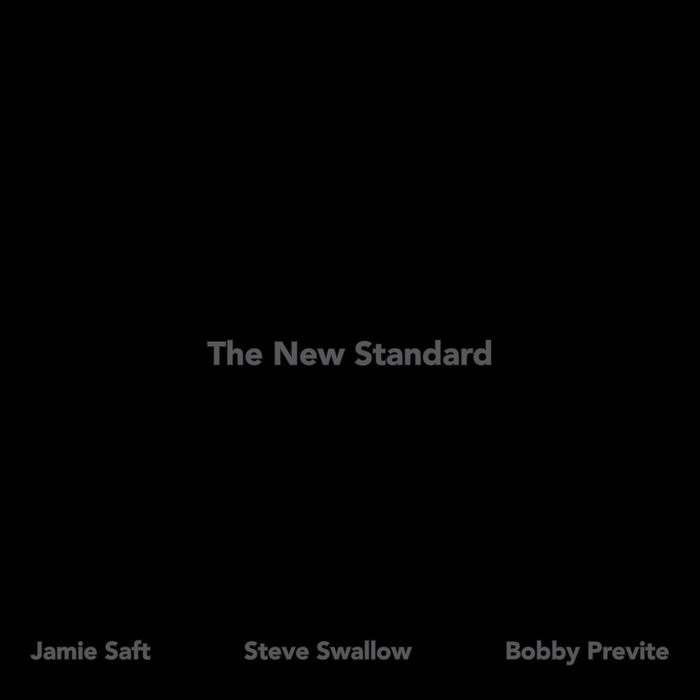 While Jamie Saft has initiated all manner of hellacious skronking on his previous RareNoise projects (Slobberpup, Berserk!, Plymouth), the renegade keyboardist and longtime Merzbow sideman settles into far mellower musical terrain on The New Standard. And with a dream rhythm tandem of drummer Bobby Previte and bassist Steve Swallow, both prolific composers and bandleaders in their own right, Saft is in regal company on this collaborative trio outing. Alternating between piano and organ on these ten tracks (seven of which he composed), Jamie’s thoughtful and uncharacteristically melodic contributions blend brilliantly with those of his esteemed elders. And though they may not have all played together before as a unit prior to this recording, their connections run deep and their chemistry in the studio was immediate.

“It was the simplest, chillest record I have ever done,” says Previte. “We set up, went out and had a nice lunch, went back to the studio and three hours later it was all done in one take. It’s kind of incredible it actually worked out as it did. And my 1965 Rogers Holiday model tubs, which I got when I was 14 years old, have never, and probably will never sound better. The sound is so full, so creamy I feel like licking it!”

Saft, who first met Previte in 1993 when he was hired to play in the drummer’s band Weather Clear, Track Fast, calls The New Standard “100% collaborative.” As he explains, “Steve and Bobby have been working together for decades and Bobby introduced us many many years ago, at first to discuss espresso, which is a shared passion of ours. Steve was also extremely generous with his knowledge of coffee and we struck up a fond correspondence. Bobby, of course, was secretly trying to put us together musically and finally in the summer of 2009 we all convened at my new studio near Kingston, New York (Potterville International Sound) for this session. So this album came from the purest of sources -- a genuine desire from old friends to make music together.”

Master bassist Swallow, whose track record includes landmark jazz recordings with the likes of George Russell, Jimmy Giuffre, Gary Burton, Paul Bley, Art Farmer, Chico Hamilton, Stan Getz, Steve Kuhn, Carla Bley and John Scofield as well as several of his own recordings as a leader, had previously recorded and toured in Previte’s Bump quintet beginning in 2003. He was ultimately recruited for The New Standard session by both Previte and master engineer Joe Ferla, who is regarded as the fourth member of the band for this remarkably empathetic session. “This recording was accomplished with Joe's incredible mastery at capturing mixes on the spot,” says Saft. “Joe recorded everything analog direct to two-track 1/2" tape through a Neve console right here at Potterville International Sound as we played. Joe brought the same magic that Steve and Bobby contributed to this session. He’s got absolute attention to detail, he’s inside the music like a master, plus he has the wisdom to capture it on the spot direct to tape brilliantly. We're so lucky to have had him as part of this recording.”

Adds Previte, who created his own intuitive drum feels throughout the session: “The music is highly improvised, more than you think. We did the entire record in three hours. Some tunes were completely improvised, some were brought in by Jamie but I think even he would agree they were sketches, really. He'd just tell Steve the harmonic rhythm, or we'd discuss it for a second, literally, and we were off! All first takes. And we never ever talked about how to start or how to end. The beginnings and endings are probably my favorite parts of this record because you can hear there was nothing planned in the least. We all dovetailed to the ends together. In fact, the endings are like little pieces in themselves. For instance if you listen to a Coltrane record, often you can tell they didn't have an ending, but there was no panic, no stress. They knew the tune would end itself and there was patience there. That's a quality in short supply today but on The New Standard you can hear that, especially with Steve. For instance, when I will take a left turn on one of those improvised endings, instead of interacting with me he stays at home within himself, and it's just magnificent. When you do that, when you don't cling too tightly to the other musicians, you bestow upon the other players so much freedom. As he he said to me once, ‘Interaction is overrated.' I couldn't agree more, except for the fact what he does IS interaction. It's just interaction on a much higher level than is usual in improvisation.”

The New Standard opens with Saft’s relaxed swinger “Clarissa,” which is fueled by Swallow’s unerring bass pulse and Previte’s slick brushwork on the kit. This perfect introduction to the triumverate leads into another Saft composition, “Minor Soul,” which is rendered with all the patience and downhome quality of vintage Wynton Kelly or Junior Mance piano trios. “Step Lively” is a more buoyant rumba-boogie number paced by Previte and Swallow. Jamie’s organ makes its first appearance on the gospel-tinged number “Clearing,” which bears not a small resemblance to one of Jamie’s significant influences, The Band. “About seven years ago I moved my crew to the Hudson Valley between the Shawangunk and Catskill Mountains. We live right in the seat of where so much essential music from the past 60 years was created -- Bob Dylan, The Band, Woodstock. Certainly these sounds were in my head as I constructed pieces for us to work with. I've been a huge fan and proponent of the music of both Dylan and the Band and certainly they were both heavy influences for this session. I also was looking to capture something placid and serene that reflects my love for country living and a more sustainable way of being.”

“Trek” opens with Previte’s drum ‘n’ bugle corps cadence on the kit, setting a compelling foundation for the piano trio piece that follows. The title track is a showcase for Swallow’s signature melodic playing on the electric bass guitar while the uptempo swinger “I See No Leader” has Previte setting the pace with his insistent ride cymbal work. Says Saft of that composition, “The idea behind ‘I See No Leader’ is twofold. The obvious on being there is no real leader to this group. Though I have contributed most of the structures, when you have absolute masters like Steve and Bobby (and Joe for that matter), all it takes is a group of the simplest structures and suddenly there's magic on the tape. The title of this song also refers to the analog tape on which this album was recorded. As we progressed through the sessions I ran out of fresh reels of tape and we were forced to start rolling over old reels from my studio vaults -- a reel in which we ‘saw no leader’ referred to the leader tape used to mark beginnings and ends.”

“Blue Shuffle” opens with some bluesy solo organ by Saft before the trio settles into an early ‘60s organ lounge vibe with Swallow walking on bass and Previte providing a supple backbeat for the dancers. “All Things to All People” is a throbbing race on the B-3 fueled by Previte’s jungle drums and the closer, “Surrender the Chaise,” is an intimate, slightly melancholy piano trio number that sounds like one of Chopin’s nocturnes as played by Bill Evans. Swallow adds a solo on this closing number that is a sheer masterpiece of melody. Saft has high praise for the great bassist. “It was an absolute honor to work with a musician of Steve's caliber,” he says. “It was like walking on air! Steve has the deepest intuition found so rarely these days. It was as if I could go ANYWHERE and Steve was standing there waiting for me with arms outstretched. A true master!”

Says Saft of his compositions on The New Standard, “Bobby suggested that I put together simple structures for us to use as starting points. I tried to put together pieces that were super soulful and honest. I wanted compositions that would highlight Steve's absolute mastery of melody and Bobby's incredibly soulful approach to groove. They took my simple pieces and made them into grand structures on which to improvise. Beginnings and endings were all improvised and this gives the album a special type of magic.

“The New Standard is an honest and inspired picture of the first meeting of these four minds,” adds the pianist-organist-composer. “It is wholly informed by decades of friendship, collaborations and camaraderie. I'm absolutely thrilled it has found a proper home on such a fantastic label as RareNoise Records. The sonic integrity of the session will be realized with a fully analog vinyl master -- the 180-gram dual gatefold vinyl pressing of the album will never have seen ANY computer interference. We were also extremely fortunate to enlist Scott Hull and Alex DeTurk of Masterdisk for both the CD and vinyl masters. The vinyl master was done straight from the original analog master tapes from the session. The record was recorded and mixed direct to two track analog tape and Scott compiled the vinyl masters by editing the original master recording together one side at a time. Alex DeTurk cut the vinyl lacquers for us under Scott's supervision on the vinyl lathe at Masterdisk direct from the compiled analog masters. The depth of the vinyl masters is, frankly, sonically stunning. It harks back to the golden age of jazz recordings of the ‘60's. It is absolutely at the highest level. I'm beyond proud of the sound of this one and truly believe that this album will really stand out from the pack, sonically.”